Economics for the Common Good

It is a great pleasure and honour for Department of Economics (ECON) and Department of Food and Resource Economics (IFRO) to invite to this public event where we will celebrate the recent release of Jean Tirole's book 'Economics for the Common Good', Princeton University Press. 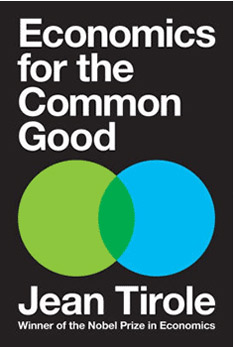 In his book Tirole, awarded the Nobel Prize in Economics in 2014, applies his economic insights to address, in an accessible way, urgent social and political issues of today, ranging from the recent financial crisis, labor market laws, industrial policy, how the digital revolution changes everything, and – not the least – the problem of climate change.

In the chapter on climate change Tirole explains why the hitherto obtained international agreements (e.g. Copenhagen 2009 and Paris 2015) are insufficient and ineffective. Tirole addresses the key question: How can an international coalition to combat global warming be fair and effective so that “free rider” countries are avoided?

At the meeting Tirole will introduce themes from the book. Then Professor Frederick van der Ploeg, Oxford University, a leading scholar in macroeconomics, public economics and environmental economics will interview Tirole and chair a dialogue between Tirole and the audience.

Jean Tirole’s Nobel Prize, 2014: Jean Tirole was rewarded the Nobel Prize in 2014 for his pathbreaking and wide-ranging contributions to the economics of market power and regulation.

The event is public.
Free admission.

The event is arranged by Dept. of Economics (ECON) and Dept. of Food and Resource Economics (IFRO) as an offshoot of an international workshop, “Frontiers in Climate Change Economics”, held at ECON, 4-5 October. Organizing committee: Julien Daubanes and Lars Gårn Hansen, IFRO, Christian Groth, Peter Birch Sørensen, and Hans Jørgen Whitta-Jacobsen, ECON. The workshop and the public event are supported by the Danish Council on Climate Change and the Danish Economic Council.

Video from the event, where Professor Rick van der Ploeg, Oxford University, chairs a dialogue between Tirole and the audience.