Wealth Inequality in Childhood and Beyond: New Danish Evidence

Even in famously egalitarian Denmark, there are people who enter adulthood with substantial wealth amassed from transfers throughout childhood. What’s more, this childhood wealth is a very strong predictor of wealth in adulthood nearly three decades later. These are among the findings of research by Simon Halphen Boserup, Wojciech Kopczuk and Claus Thustrup Kreiner, published in the July 2018 Economic Journal.The new research analyses wealth records for the Danish population observed over three decades to address a series of questions: how much wealth inequality is there in childhood? How did it arise? And, perhaps most importantly, how much does it matter for wealth inequality in adulthood?

It turns out that even some infants have assets in their name, and by the time they reach adulthood, nearly all Danish children own some assets. The average wealth level at the age of 18 is modest, but the average wealth of the top 1% and the top 0.1% groups is respectively five and 20 times the country’s average disposable income.

Children may work in Denmark after turning 13 but, unsurprisingly, these earnings cannot explain the wealth levels of the richest children. For the top 1% richest at age 18, at least 92% of their wealth stems from transfers received during childhood. Among the top 0.1% richest, at least 99% percent of wealth derives from such transfers.

Aligned with this result, the study finds that the chance of being among the 1% richest 18-year-olds is 15 times higher if the parents are among the 1% richest within their cohort. Even in famously egalitarian Denmark, there is a group that enters adulthood with substantial wealth amassed from transfers throughout childhood.

Most strikingly, this childhood wealth is a very strong predictor of wealth in adulthood nearly three decades later. Figure 1 illustrates this fact. The red curve shows for each percentile of children’s own wealth rank at age 18 what the average wealth rank of the child at age 45 turns out to be almost thirty years later. There is a strong positive relationship between wealth measurements nearly three decades apart. 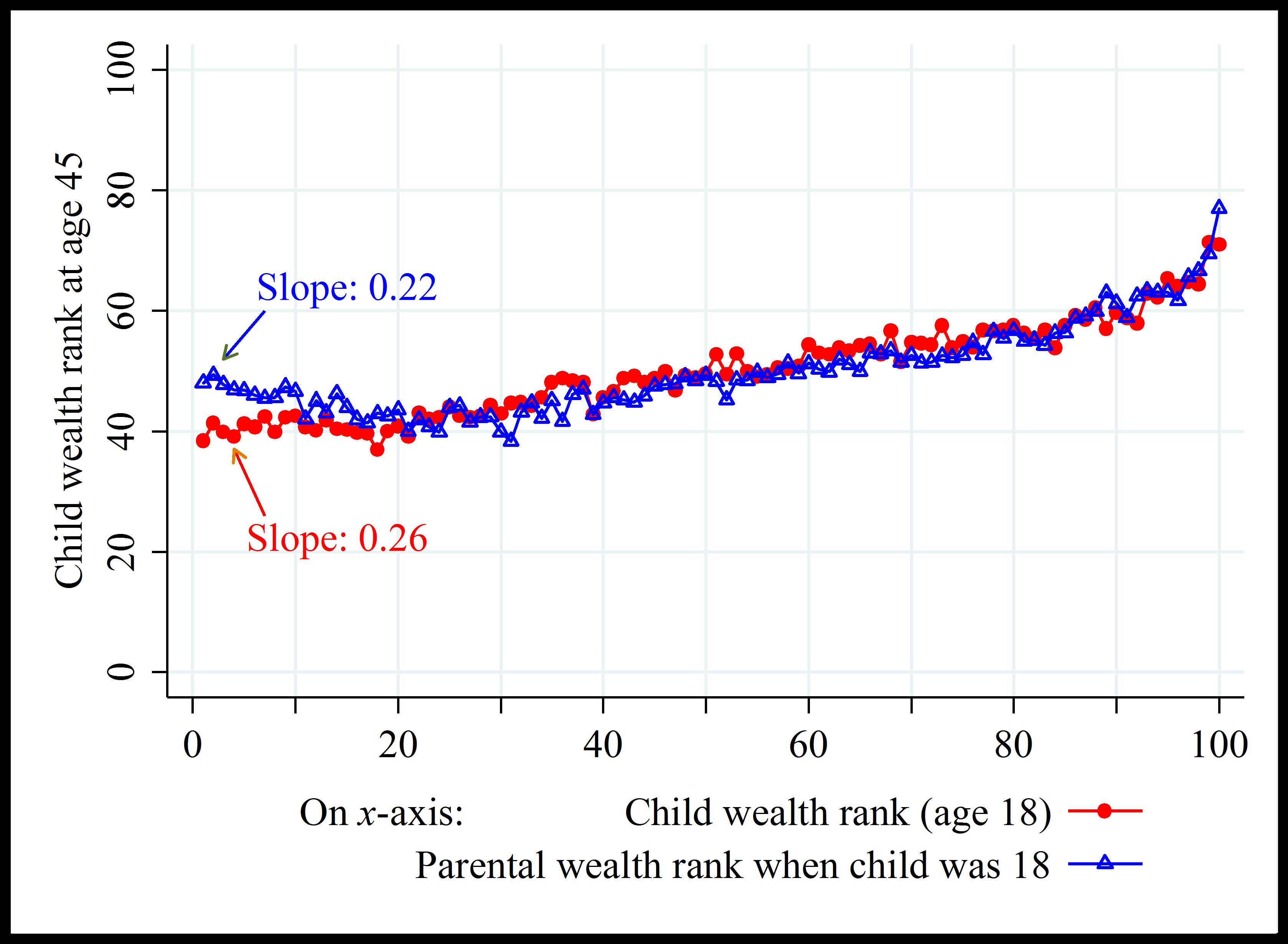 Young adults at age 18 may follow a variety of different life trajectories in terms of education, career and family, so it is surprising to find that wealth holdings at this point in life have such a strong relationship with future outcomes and that this effect dominates parental wealth.

The analyses reject this hypothesis and conclude that childhood wealth is not hugely important in its own right because it is simply too small. Instead, childhood wealth seems to be a marker for children who in the future will save more than others or will receive more wealth transfers from parents than others.

That it is the child’s own wealth rather than parental wealth that dominates in explaining future accumulation suggests that there are important differences even among families with the same level of wealth, and that it is children from families that promote wealth accumulation early on that are most likely to end up at the top of the wealth distribution in adulthood.