Top Incomes in Scandinavia: Recent Developments and the Role of Capital Income

Over the past decades, we have witnessed a substantial increase in the focus on income inequality. Among academics, the focus has been particularly on top income shares starting with the work by Piketty (2001) and Piketty and Saez (2003). However, the particular focus on top income shares might seem narrow. Why only focus on the top of the income distribution, when we have standard measures, such as the Gini coefficient that, capture changes in the entire income distribution? For many economists – not least in Scandinavia – the Gini coefficient has long been the inequality measure of choice.

In recent work (Søgaard, 2018), I set out to answering these questions, point to the strengths and weaknesses of using top income shares as inequality measures as well as highlight some of recent trends and potential drivers of top income shares in the Scandinavian countries.

In the public debate, one likely reason for the focus on top income shares is the fact that changes in inequality driven by the top of the income distribution is a very salient form of inequality. This is for example visible in the public discussions of CEO compensation even if the number of CEOs constitute a relatively small number of individuals. On top of this, there are at least three reasons for the recent academic focus on top income shares:

These reasons are perhaps best summarized by the almost iconic figure of the top one percent income shares over the past century shown in figure 1. The figure reveals marked changes in inequality over the past century. In the 1900s-1920s, the average top income share in the Scandinavian countries, USA and France was just under 20 percent. 60 years later (in the 1970s), the average top income share was more than halved to nine percent.

Figure 1: Top one percent income share in the Scandinavian countries, USA and France 1900-2015

Underlying this overall trend, we find differences across countries in both the level of inequality and in the year-to-year changes. For instance, Sweden and Denmark had a sharp increase in ine-quality around the First World War, when the top income shares averaged 28 percent, the highest income shares ever recorded for the six selected countries. This increase is direct evidence of the amount of money the so-called “Goulash Barons” earned during the war.

Since the 1970s, we see a gradual reversal of the downward trend in inequality. The top income share first started to increase in the USA (along with other Anglo-Saxon countries). Ten years later, in the 1980s, the top income share started to increase in France, while the top income shares in the Scandinavian countries hovered at around five percent until they started increasing in the early 1990s.
Currently, the USA has more or less returned to the same high top income share that they experienced at the beginning of the 20th century, while the income shares for the Scandinavian countries are approaching ten percent. Looking over the past 100 years or more, the top income shares ap-pear to have followed a somewhat U-shaped path, especially for the USA.
Turing to the drivers of the recent increases in top income shares it is important to note that clear identification of the effect of any one driver of inequality is difficult due to the fact that we are in general restricted to cross-country analyses. Over a given time period countries are likely to be hit by a myriad of different shocks, which makes it difficult to isolate the effect of each individual shock.

That said there is increasing evidence suggesting that capital income plays an important role in driven inequality. In this work, I add to this body of evidence by considering the role of the reduction in interest rates and the growing important of dividends in the economy that we have witnessed over the last three decades.

Based on register data from Denmark I show that both interest income and interest expenditures form a more or less fixed share of disposable income throughout the distribution. This means that scaling up or down these payment through for example changes in the interest level do not have any direct (mechanically) effect on income inequality. In contrast, dividend income is highly concentrated at the top of the income distribution with 2/3 of all dividends going to the top one percent of income earners. A shift from interest income to dividends would therefore (mechanically) increase inequality even if the overall level of capital income were unchanged.

To illustrate the importance of dividends for the top income shares, I present in figure 2 the correlation between top income shares and the share of dividends in the total income of the household sector. These series correlate strongly. In particular, for Finland and Norway were the correlation is around 0.8-0.9. For Denmark and Sweden, the (detrended) correlations are considerably lower, although the low correlation for Sweden this is driven by the beginning of the period. Starting in 1995, the de-trended correlation for Sweden is on par with that of Finland. 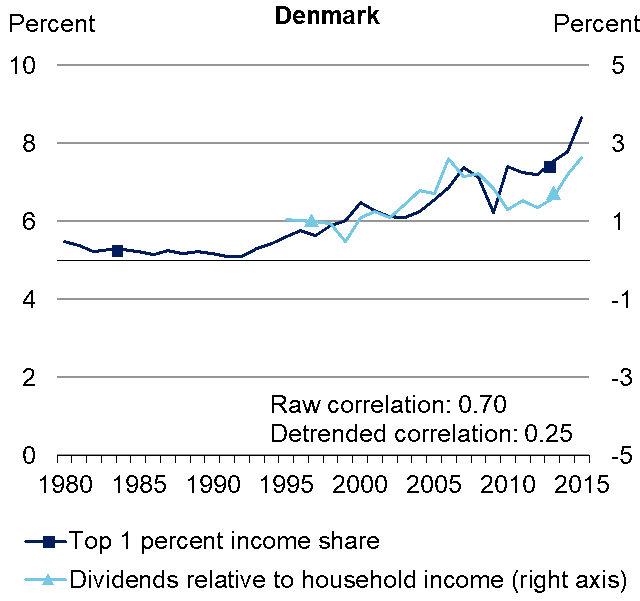 Figure 2: Correlation between dividends and the top one percent income share in Scandinavia