How does a financial crisis spread to the real economy?

Was the most recent financial crisis transmitted to the household sector through a reduction in the credit supply? The tightening of credit by banks in financial distress is one among several possible explanations why households slashed consumption in the aftermath of the financial crisis.

The Financial Crisis in 2007-2008 was followed by the Great Recession where corporate investment, employment and household consumption fell sharply in virtually all developed countries. This pattern of a financial bust followed by a severe contraction of the real economy has played out numerous times over the last centuries.

In new research (Jensen and Johannesen, 2017), we investigate whether the most recent financial crisis was transmitted to the household sector through a reduction in the credit supply. The tightening of credit by banks in financial distress is one among several possible explanations why households slashed consumption in the aftermath of the financial crisis.

Our laboratory is Denmark where households are highly levered and thus depend strongly on credit to sustain consumption. We exploit a unique dataset that allows us to track the borrowing of each individual in each bank over the period 2003-2011. Our main result is that individuals, whose primary bank in 2007 was exposed to the imminent financial crisis, fared significantly worse through the recession in terms of credit and consumption than similar individuals whose primary bank in 2007 was not exposed. 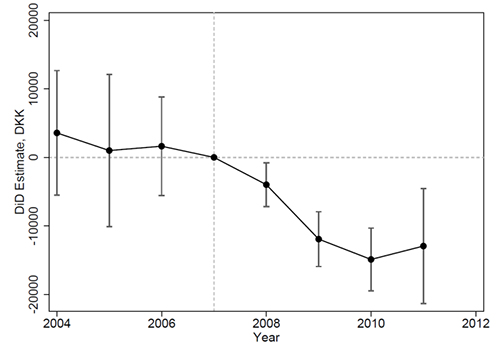 The borrowing of the two groups followed the same trend until 2007 and then diverged sharply. In 2011, the borrowing of customers in exposed banks had decreased by DKK 14,000 relative to the control group. The divergence cannot be explained by differences in labor market outcomes.

We show that the relative decrease in borrowing was associated with a relative decrease in consumption: we observe a significant drop in our imputed measure of household spending, notably in 2009 at the peak of the recession. This partly reflects that customers in exposed banks purchased smaller and less costly houses, but also other categories of spending were affected.

Finally, we document that households holding low levels of cash on their bank accounts were more severely affected than others. Intuitively, households with small liquidity buffers are more vulnerable when credit standards are tightened and may therefore suffer the most from a financial crisis. 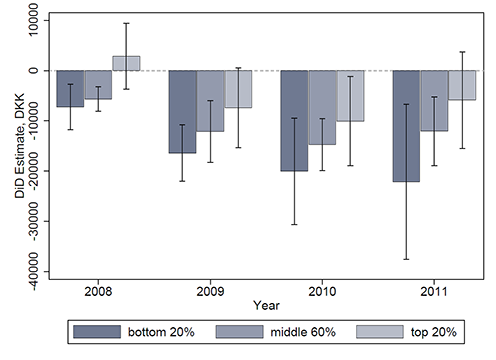 The most liquid households were barely affected by the credit supply shock and within this group the change in borrowing over the period 2007-2011 did not differ across customers in exposed and non-exposed banks. By contrast, the least liquid households were severely affected and the borrowing of customers in exposed banks had decreased by more than DKK 20,000 relative to the control group in 2011.

This result illustrates how differences in behavior (creation of liquidity buffers before the crisis) interacts with external shocks (the credit supply contraction caused by the crisis) to create inequality in outcomes.