How Do House Prices Drive Spending?

House prices and spending move together but little is known about the underlying mechanism linking them.

The effect is magnified among fixed rate mortgage borrowers who have an incentive to refinance their loans to lock in a lower market rate. These results show that the collateral effect is important for explaining the link between house prices and spending. They also emphasize the key role of the mortgage market in transforming house price increases into spending and suggest that monetary policy can amplify the link between house prices and consumer spending by affecting interest rates on mortgage loans.

House prices and spending tend to move in tandem. However, there is disagreement over the causes of this link. One set of studies emphasize the housing wealth effect hypothesis. According to this, an unanticipated change in the home value can affect total life time resources, and this can lead home owners to revise their consumption plans. Campbell and Cocco (2007), Muellbauer (1990), Skinner (1996) find support for this hypothesis. An alternative set of studies emphasize the collateral hypothesis whereby an increase in home values generate additional collateral which home owners can borrow against. Agarwal and Qian (2017), Aron and Muellbauer (2013), Browning et al. (2013), Cooper (2013), Disney and Gathergood (2011), and Leth-Petersen (2010) find evidence in support of this hypothesis, and it is also the explanation emphasized by Mian and Sufi (2011) and Mian, Rao, Sufi (2013) in the context of the recent US housing collapse and mortgage crisis.

Up to now it has been difficult to perform a direct test of the housing wealth effect hypothesis against the collateral effect hypothesis because data on subjective expectations to home values along with data on mortgage borrowing and spending have been lacking. Identifying unexpected movements in home values is fundamentally a matter of how subjective expectations about home values align with realizations. We collect a new individual level longitudinal data set for about 5,000 Danes covering the period 2011-2014 with subjective expectations to future home values. Our data documents exactly what home owners believe about their wealth, and not what the econometrician believes, and they enable us to calculate subjective unanticipated home value changes. We link this information to high quality third party reported administrative records with information about deposits, financial assets, bank and credit card debt, and detailed information about mortgages and the timing of refinancing decisions. This unique data set enables us to directly test the housing wealth hypothesis against the alternative hypothesis that the association between spending and home values is driven by the loosening of borrowing constraints when prices increase.

We find that unanticipated home value gains lead to increased mortgage borrowing. The marginal propensity to increase mortgage debt is 3-5% of unanticipated home value gains. Unanticipated home value losses are not associated with any change in mortgage debt. This pattern is documented in Figure 1. Because we have data for practically the entire budget constraint we can back out the implied spending response which turns out to exhibit the same pattern and the same magnitudes as for mortgage debt growth. The asymmetric response to positive and negative home value changes is indicative that the wealth effect is not likely to be the most relevant explanation. When home owners are entirely unconstrained then spending adjustments should be symmetric for positive and negative price changes. The expected pattern is different when mortgage borrowing constraints are at play. They only bind at the time of loan origination, such that banks do not ask borrowers to pay back the loan more quickly when prices decline. For this reason, when borrowing constraints drive the association between home values and spending we should expect to see an effect only when prices increase. To further support this conclusion, we consider home owners with high and low mortgage loan-to-house value (LTV) ratios separately and find that the response is concentrated on home owners who are close to their borrowing constraint. 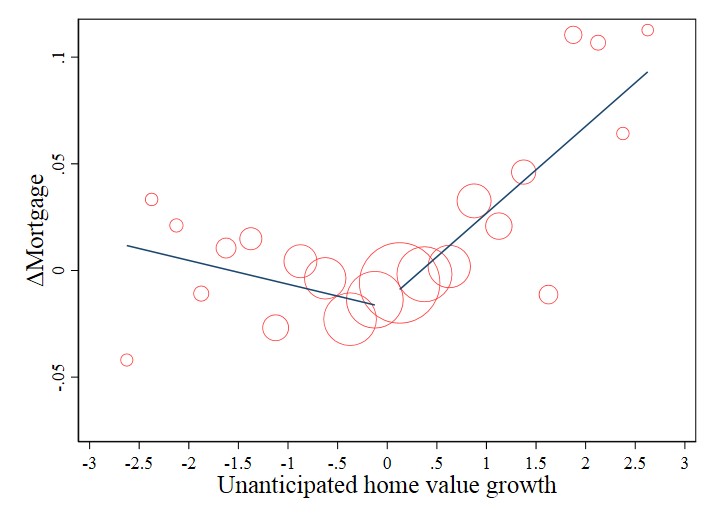 Notes: The horizontal axis shows annual unanticipated home value growth in the period 2011-2014. The vertical axis shows mortgage debt growth. Mortgage debt growth is derived directly from records reported by mortgage banks. The panel shows a binned scatterplot (red circles) where the bins are defined over equal intervals of the unanticipated home value growth and the size of the circles scaled is by the number of observations in the bins. Regression lines weighted by number of observations are estimated separately for positive and negative home value growth (blue) are overlaid. All variables are normalized on average income during 2008-2010.

We further find that holders of fixed rate mortgages who are faced with an incentive to refinance to lock in a lower market rate take advantage of this opportunity and extract equity at the same time. This further amplifies the effect of the house price increase on borrowing and spending. These findings point to the importance of the mortgage market in transforming price increases into spending and suggest that monetary policy can play an important role in transforming housing wealth gains into spending by affecting interest rates on mortgage loans. 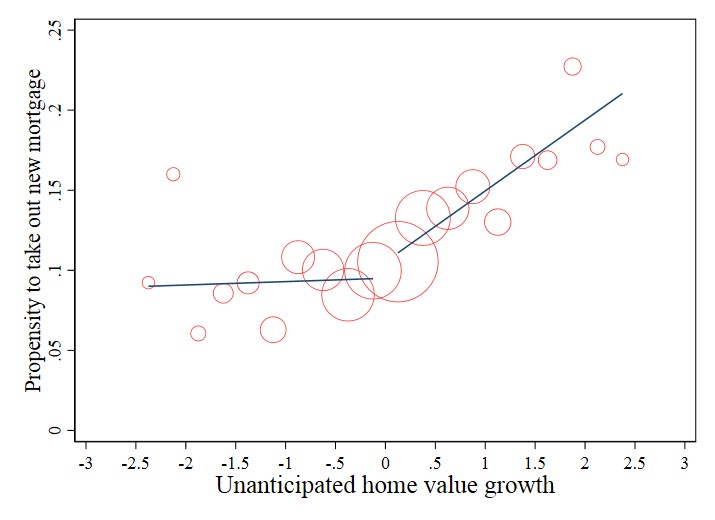 Søren Leth-Petersen is a Professor at the Department of Economics, University of Copenhagen, deputy director of CEBI, Center of Economic Behavior and Inequality and research fellow at CEPR.