Financial trouble has big consequences for individual welfare and for the design of debt relief policies and bankrupcy laws. However, little is known about why some people end up in financial trouble while others do not.

About 5 percent of all Danes are late with paying the dues on their loans at any point in time. This rate is surprisingly stable across time and moved only little during the recent financial crisis suggesting that financial trouble is not merely related to being affected by unemployment or other unfortunate events.

The authors leverage a new administrative registry data set provided by the Danish Tax Agency. The data set holds information about the universe of loan accounts held by Danish residents in Danish banks, covering more than 31 million personal loan accounts for the period 2004-2011. The data document loan defaults, measured as being more than 60 days late with payments on the loan. The loan data are linked to the population register, which reveals the identity of parents.

At age 30, individuals with parents in default are more than four times as likely to be in default as individuals whose parents are not in default. Moreover, the intergenerational correlation is apparent soon after children turn 18 years old where they become legally eligible to establish debt.

Default propensity by age and by parental default status 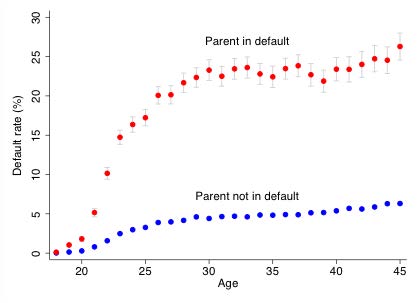 The pattern documented in Figure 1 is stable across time, across levels of loan balances, across parental income levels, and across levels of cognitive ability as proxied by the middle school grade point average. The authors also collected information about financial trouble from two major credit bureaus, and the relationship exists based on this alternative measure of financial trouble.

To get further insight into the mechanisms driving the correlation documented in Figure 1, the authors hypothesize that it could be driven by three different mechanisms: Differences in financial behavior, which is transmitted across generations, that children and parents are exposed to the same adverse shocks, and that family members can insure each other against adverse shocks by pooling resources. In order to learn about the relative importance of these mechanisms, the authors run a series of tests.

For example, they document that when children are hit by unemployment they become more prone to default. However, the default risk of the parents does not change around that time as would have been expected if parents and children were exposed to common adverse shocks.  Children run down their liquid assets when they are exposed to unemployment events.

However, the authors do not observe any drop in the level of financial assets of their parents. This suggests that parents and children do not pool resources and insure each other when bad financial consequences occur.

In order to test the hypothesis that the intergenerational correlation in default is related to financial behavior, the authors perform two additional tests. In one test, they exploit that parental default can be predicted by their level of savings almost two decades before default is observed. This is interesting because it rules out that current default is caused by adverse shocks occurring at the business cycle frequency.

In the second test, the authors elicit key preference parameters, such as attitudes to risk and time discounting, using established survey instruments, for a small subset of the population. This survey data is linked at the individual level to the register data about defaults. The authors find that the elicited preference parameters predict real-life financial trouble of both parents and children.

The large differences across people in risk-taking behavior imply that there are systematic differences in the risk that banks face when granting loans to people. By analyzing the interest setting of banks, the authors find that financial institutions are unable to fully price in the systematic risk of default related to family background ― a finding that points to the existence of an interest rate externality in the market for personal loans. In isolation, the results suggest that less debtor-friendly bankruptcy laws are sensible.

However, this should be balanced against social insurance benefits from a more debtor-friendly system.