The focus of this study is the extreme shock of the death of a spouse. We show that widows, who tend to be secondary earners and face large income losses when their husbands die, increase their labor force participation by more than 11%. In contrast, widowers, who tend to be primary earners and need to financially support one fewer person when losing their wives, decrease their labor supply. Importantly, female and male survivors exhibit similar sensitivity to comparable changes in household income.

The death of the spouse can impose large financial burdens on the surviving family. Using three decades of administrative data, we show that widows experience significant income losses upon their husband's death and we find that they compensate for these financial losses by increasing their labor market participation. This need for self-insurance, which we find even for older widows, suggests that more generous social insurance in the form of survivors’ benefits could improve welfare.

Severe illnesses and the subsequent deaths of primary earners are among the most devastating shocks that households face and are a major source of financial risk. Studying how households respond to severe adverse health events is therefore important for our understanding of self-insurance behavior over the life cycle, where a key potential self-insurance mechanism against income shocks is the labor supply of family members. Beyond its implications for household behavior, the degree to which households insure through labor supply and how it varies across subpopulations are central for the design of social insurance programs.

In our recent work (Fadlon and Nielsen, 2017a), we aim to answer this question by leveraging long panels of administrative data on health and labor market outcomes for the entire Danish population from years 1980-2011. The combination of large-scale objective health and labor market information and the ability to link across spouses provides us with a particularly well-suited setting for studying household labor supply responses in the context of developed economies.

The focus of our study is the extreme shock of the death of a spouse, which can lead to significant and permanent income losses. One of our main findings is displayed in Figure 1, which plots how surviving spouses’ labor supply responds to the death of a partner. In this figure, which includes all shocks taking place in 1985-2006, we compare the behavior of the treatment group (in red) to that of our constructed control group that is composed of comparable households that experienced the same type of shock but five years later (in blue). The x-axis denotes time to the shock (in years), where the event year is normalized to period 0. The y-axis is the labor force participation of the surviving spouse. Thus, the difference between the red and blue lines in years 0-4 estimates the dynamic responses to spousal death. 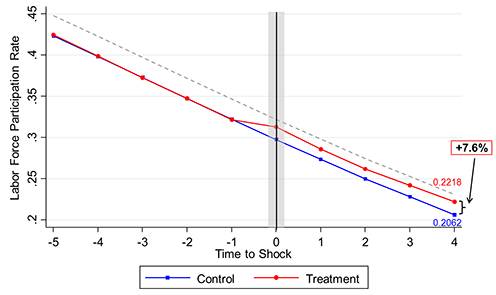 Figure 1 reveals that surviving spouses respond immediately to spousal death by increasing their labor supply. Even four years after their spouse’s death, survivors’ labor force participation exhibits an increase of 7.6%.

In which households do surviving spouses experience a greater burden of increased labor supply?

The average effects that we find are entirely driven by households that experience substantial income shocks due to the death of a spouse, and may therefore have greater need for self-insurance through labor supply.

We use different strategies and sources of heterogeneity to show that the mean increase in labor supply is fully attributable to survivors whose deceased spouses had earned a large share of the household's income, who have less disposable income at the time of the shock, and who are less formally insured by government transfers.

A general finding is that surviving spouses with less attachment to the labor market are more vulnerable to spousal death. For instance, Figure 2 shows that lower baseline earnings of the surviving spouse are associated with larger earnings increases in response to the shock. Similarly, these responses are also particularly strong among households in which the deceased spouse was the primary earner.

Importantly, though the exposure to risk is highly correlated with gender, female and male survivors exhibit similar sensitivity to comparable changes in household income. 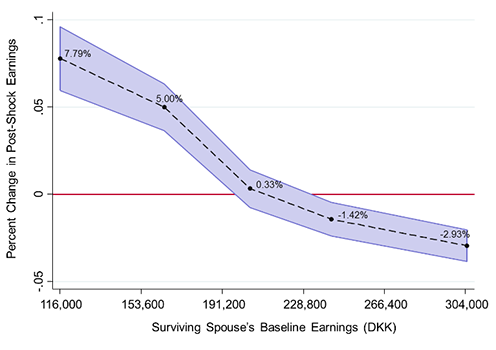 Figure 2: Spouses’ Annual Earnings Responses to Fatal Health Shocks by the Level
of their Own Pre-Shock Earnings

Putting together the results we highlight here with additional findings that we report in the paper, we show how underinsured households facing widowhood respond by self-insuring via increased labor supply. Theoretically, we show in Fadlon and Nielsen (2017b) that the extent to which households self-insure against realized income losses using spousal labor supply is directly related to the degree to which they lack formal insurance and would gain from more generous government benefits. Applying this logic to our empirical findings, we argue that it may be welfare improving to let survivors benefits depend on age, since the relative increase in survivors' labor supply is substantially larger for older widows whose lower labor force attachment makes them more financially vulnerable.

Also, since survivors' labor supply is strongly increasing in the share of the household's income that the deceased had earned, there is an argument for survivors benefits to depend on the deceased spouse's work history. Evidently, these features characterize the current large survivors insurance scheme within the Social Security system in the US. As such, our findings suggest efficient ways to target government transfers through existing social insurance programs.