Do Lower Minimum Wages for Young Workers Raise their Employment?

A new study by Claus Thustrup Kreiner, together with Daniel Reck from London School of Economics and Peer Ebbesen Skov from Auckland University of Technology, measures the impact of youth minimum wages on youth employment. By exploiting a large discontinuity in Danish minimum wage rules at age 18 and access to payroll records at the monthly frequency for the Danish population, the authors are able to provide precise estimates of the employment effects. The relevant policy elasticity for evaluating the effect on youth employment of changes in their minimum wage is in the range 0.6-1.1.

Minimum wages, set by law or by collective agreement, exist in 3/4 of OECD countries (OECD 2015). In the United States, minimum wage increases have been high on the policy agenda in recent years, motivated in part by many studies finding small employment effects of minimum wage hikes. Some cities (e.g. LA, Seattle) and the state of California have recently legislated a minimum wage rate of $15, a much higher rate than the current Federal minimum of $7.25 per hour.

The Danish context is ideal to analyze the question. Denmark has large changes in minimum wage rates when workers turn 18 (and no change at any other ages) and a high adult minimum wage, for example comparable to the $15 level in place in California and under consideration more generally in the US. This institutional setting combined with access to high-quality data on wages, employment, and hours worked at the monthly frequency for the entire Danish workforce enable the authors to provide compelling empirical evidence.

Our main findings are illustrated in the figure below, which shows that the age discontinuity in minimum wages has a large impact on employment around age 18. Panel a plots average hourly wages as a function of age (measured in months), for two years before and two years after the individuals’ 18th birthday. The average hourly wage rate jumps by DKK 46, corresponding to a 40 percent change in the wage level, at age 18. Panel b plots the employment share by monthly age. It shows a 15 percentage-point decrease in employment at age 18, which corresponds to a 33 percent decrease in the number of employed individuals. This gives an elasticity around -0.8.

(a) Hourly wage by age 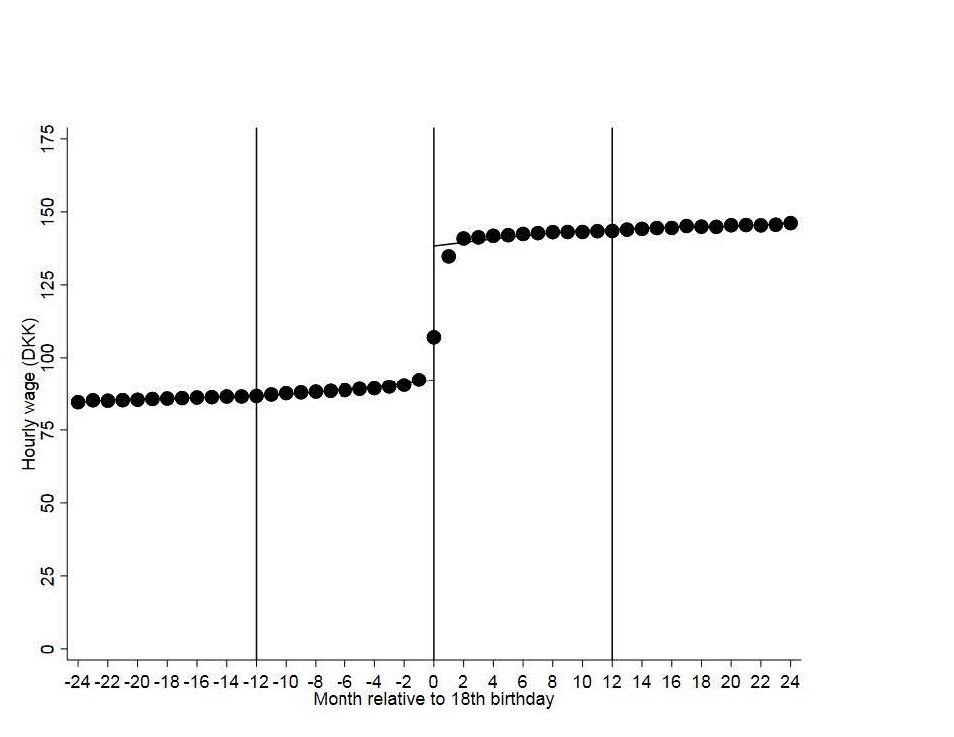 (b) Employment rate by age 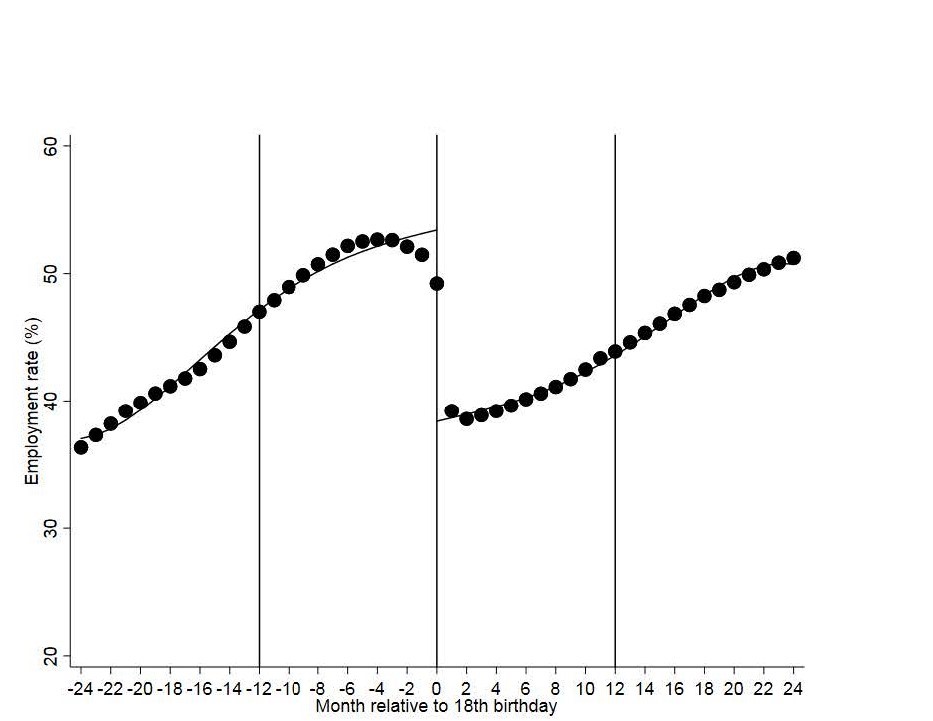 The total hours worked falls by 45 percent, which implies that the aggregate wage income is almost unchanged despite of the increase in hourly wages.

Using economic theory and additional empirical analyses, the authors show that the relevant policy elasticity for evaluating the effect on youth employment of changes in their minimum wage is in the range 0.6-1.1.

Congressional Budget Office (2014): Congress of the United States, "The Effects of a Minimum-Wage Increase on Employment and Family Income", Publication 44995.