Despite considerable gender convergence over time, substantial gender inequality persists in all countries. Using Danish administrative data from 1980-2013 and an event study approach, we show that most of the remaining gender inequality in earnings is due to children. The arrival of children creates a gender gap in earnings of around 20 percent in the long run, driven in roughly equal proportions by labor force participation, hours of work, and wage rates. Based on these estimates, we show that the fraction of gender inequality caused by child penalties has increased dramatically over time, from about 40 percent in 1980 to about 80 percent in 2013.

Over the last century, we have witnessed considerably convergence in the labor market outcomes of men and women. However, despite the disappearance of gender differences in education and the implementation of anti-discrimination policies, gender inequality in earnings and wage rates continues to be substantial and the process of convergence appears to have slowed down.

In our research (Kleven et al., 2018) we provide a simple explanation for the persistence of gender inequality: the effects of children on the careers of women relative to men are large and have not fallen over time. As a result, almost all of the remaining gender inequality can be attributed to children.

To reach this conclusion we utilize administrative data for the full population in Denmark since 1980 and follow couples who have a child together over a period from 5 years before they have their first child to 10 year after. For a range of labor market outcomes, we find large and sharp effects of children: women and men evolve in parallel until the birth of their first child, diverge sharply immediately after childbirth, and do not converge again.

Consider for example figure 1. The figure shows the evolution of total labor market earnings of men and women relative to the underlying wage growth in the economy and the effect of individuals getting older and more experienced over time. In the years up to the birth of the first child, men and women follow almost the same trend, but in the years just after the birth, the earnings of women drop by on average 30 percent. 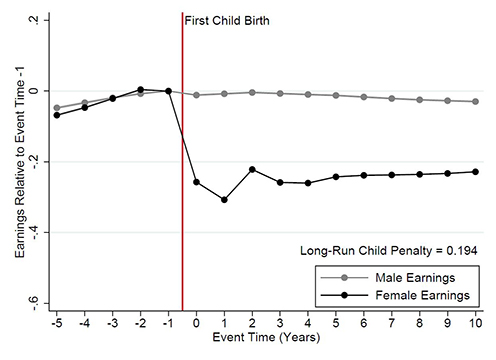 Figure 1: The impact of children of the earnings of men and women.

The 30 percent is driven by the fact that women take the majority of the parental leave, but interestingly the earnings of women are still depressed by almost 20 percent even after 10 years. This is the total effect of children including the effects of children born after the first one, and we show that the drop is increasing in the number of children (roughly 10 percentage points per child).

As shown in figure 2, we find that the fraction of the total earnings gap caused by children has doubled over time, from about 40 percent in 1980 to around 80 percent in 2013. This dramatic change reflects a combination of two underlying changes: (i) child related gender inequality in earnings has increased from about 18 percent to 20 percent, and (ii) total gender inequality in earnings has fallen from about 46 percent to 24 percent.

To understand why child related gender inequality has increased, note that although the percentage effect has fallen slightly over time, the effect now operates on a larger base due to the  general increase in the earnings of women relative to men driven by higher educational attainment of women etc. 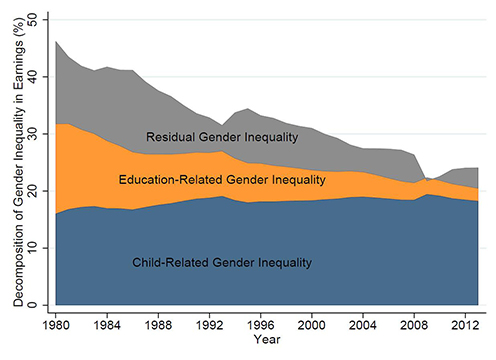 Taken together these results show that while for example gender inequality on education has declined sustainably over the past 30 years, child related gender inequality has remained and – as a consequence – appear to explain most of the earnings inequality between men and women remaining today.